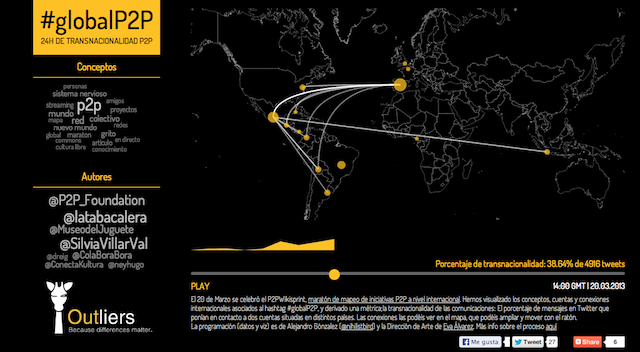 Collaboration, networking, transversality, openness, free licenses, remixing, transnationality. On March 20, the hashtag #GlobalP2P suddenly vaulted up among Twitter’s most globally used. One detail: it had never before been a TT(Trending Topic) in any country. Afterwards, it took place as the most watched among many. #GlobalP2P was a choral cry. #GlobalP2P was an insistent echo raising the visibility of the P2P Foundation ‘s Wikisprint event (a mapping of experiences happening around the commons and peer-to-peer) taking place that day in Latin America and Southern Europe. The explosion of #GlobalP2P as a global trend was no accident. There was strategy behind it. The hashtag #P2PWikisprint had had a few weeks to gear up. It came about in a decentralized way, hence its big leap to the global TT. Above all, there was a very intensive process already in place, common among hundreds of groups, networks, activists, foundations, thinkers, universities … and even some governments, both local and supranational.

This spectacular graphic visualization of #GlobalP2P, 24 hours of transnational P2P, produced by Outliers studio, highlights the incredible web of connections that appeared during that day. Some links had already existed. Others emerged. In just one day, 235 projects were mapped in the P2P Foundation wiki. And most importantly: as projects connected, new ones were born. In the upper-left corner, we can see how concepts intermingled, in spite of the normal tendency towards inbreeding. At 13:00 (GMT+1), free and open culture, government, network, and people were discussed. At the bottom left, you can see the accounts talking with one another, showing high rates of transnationality, regardless of borders.

The most interesting thing about #P2PWikisprint is its survival as a process. As an expanded community. As a transnational network. The coming months may bring more wikisprints. But without a doubt, there will be unplanned and unexpected things developing around the #GlobalP2P. The Open Latin America (working title) campaign has already launched. And one idea in the works is to create ​​distributed hackatones, to build a mobile app to find a way to geolocate, in every city, the networks, communities and/or people who work for the common good.

This text has a goal: to share the methodology. I’ll reveal a few details about the process, which may not be obvious at first glance, so that anyone can replicate the experience. These 13 keys summarize the essence of this process. They could be applied to many other fields. 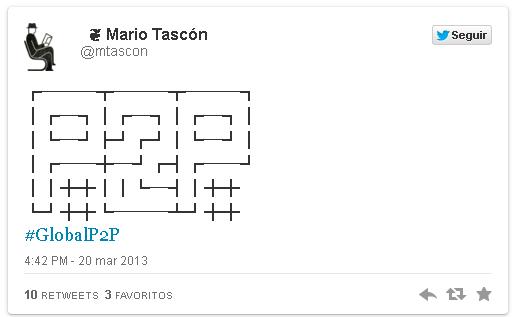 1. Circle of friends networks. The process would not have been possible without networks of confidence. A personal message sent to a hundred people at the end of 2012 wouldn’t have worked without an established network of trust. Mindmapping which networks, groups and individuals that one could get involved with in #P2PWikisprint was a vital step. The cross connection of different profiles generated a new network, also based on mutual trust, information sharing and personal connections and affections.

2. Open process. The second step was to create a Spanish-language mailing list for the P2P project called “Our Project”. Anyone can subscribe to this open list, without invitation. It wasn’t public at first. We used a personal referral strategy: each person was involved in building the community. This is how we created the network. Transparency – we even created an open document in order to add new members to the list – boosted confidence in the process. However, the list maintains the ethics of netiquette. Good online manners, with minimal static. It wasn’t always necessary to write to the entire list (as a centralized network would encourage). Better to send personal emails to a specific people, to strengthen the autonomy of the nodes.

3. Produ-communication. Production processes must be intimately tied to communication processes. Launching a campaign with a D-Day-like concrete objective may not be as effective in the network age. Communication as nothing more than marketing just doesn’t hold up anymore. We kept the procedure for #P2PWikisprint totally open from the get-go. To do this, we made use of the TitanPad platform. Every document we created – like this one, listing all the cities involved in the summons- was left open for anyone in the world to see. Documentation becomes communication, and communication is a form of action. Action-communication joined as a unit, acting as one.

4. Collaboratory Economy. The whole #P2PWikisprint process lacked financial resources. Every person, collective or institution involved, came together voluntarily and unpaid. Collective enthusiasm served as the (intangible) fuel for the whole process. #P2PWikisprint reinforced the commons-based peer production thesis as proposed by Yochai Benkler. Collaboration amongst great numbers of non-hierarchically organised individuals can be more effective than vertical organization. Besides, Benkler defends that money isn’t the sole motivator for human activity. It’s possible that, given a budget, #P2PWikisprint could have had a wider impact, but a centralized communication agency endowed with a large budget wouldn’t have produced the same outcome.

5. Ethical Framework. “Intense regulation allows for great liberty, and said liberty favours proliferation”. Guillermo Zapata, in his Spanish language article, “Más libertad… más regulación” (More liberty… more regulation), reflects on how a minimal set of very rigid rules can generate a great amount of freedom. We see this in Open Software where we find “..great freedom of usage, as long as…” the four basic freedoms are respected. The criteria for inclusion in Wikisprint – open input, participatory production and governance process and commons-oriented output – were rigid, but I’d rather define them as “freeing”. Or as a solid ethical framework. Whoever doesn’t adjust to the ethical framework is automatically excluded from the Wikisprint.

7. Expanded Communication. Distributed Action. “All change means disorganization of the old and organization of the new.” Extracted from Saul Alinsky’s “Rules for Radicals”, the above quote permeates the whole of the #P2Pwikisprint – #GlobalP2P process. A centralised process would have been a mistake. That’s why we created a communication strategy that was open, expanded and P2P. Any organization could adapt a P2P press release by adding their name and sending it to their contacts in the media. Any action-communication concordant with the ethics code was valid. In Bueno Aires they produced an animation video. In Bilbao they illustrated text with drawings. In Mexico they celebrated a week’s worth of activities. In disorder we found our equilibrium.

P2P Journalism session of the #P2PWikisprint special on the ThinkCommons.org platform

8. Hybrid Spaces. The Wikisprint also featured an important physical dimension. Meeting on the ground and speaking in the analogue realm was essential to the process. Many cities held face-to-face sessions. We simultaneously held a video-streaming Google hangout, hosted by the ThinkCommons.org platform featuring guests from across the globe. The video stream aired for nearly 14 hours. Some of these were held, face to face, at MediaLab Prado (Madrid, Spain) and Tabakalera (San Sebastian, Spain), tying in virtual and analogue spaces. Every single session from the special P2PWikisprint remains freely accessible on the Internet.

9. This is not a Trending Topic. The #GlobalP2P hashtag was chosen to encourage a global Trending Topic via Twitter. #P2PWikisprint wouldn’t do, given that Twitter penalises previously used hashtags. This action was collaboratively planned through the use of a Pad featuring general guidelines, following the same template found in the 15M and #GlobalRevolution milieu. Soon after its release, it became the 6th ranking global TT. Afterwards, it remained a TT in some countries. #GlobalP2P managed to hold its ground very strongly, especially in Spain. Achieving a TT should never be an objective in and of itself. Visualization, setting an agenda, feeding a process, building a network and creating community will always have more importance.

10. DIffuse Objective. “…but suppose they were an influence, a thing invulnerable, intangible, without front or back, drifting about like a gas?” T.E: Lawrence, writing in 1929 what would become his essay on Guerrilla Warfare, studied the conditions that allowed the victory of the Arabs over the Turks in 1916, and forever changed the logic of campaign and confrontations (not exclusively military ones). The lack of a clear, unique, visible objective can be advantageous. Best to become like vapour, drift about like gas. Fighting against a concrete enemy can be a tactical error. Guerrilla Communication has to be like the wind. Tactics are lateral, transversal, peripheral. Curtailing those initiatives in #P2PWikisprint that looked to go beyond mapping P2P initiatives (the initial objective) would have been an error. But vying to determine a common, unique objective could have led to a failure.

Everything was possible during #P2PWikisprint. It was all fair game within the ethical code. The new #GlobalP2P could hardly be described as a united force. #GlobalP2P, to paraphrase T.E. Lawrence, was like a dispersed vapour carried by the wind. 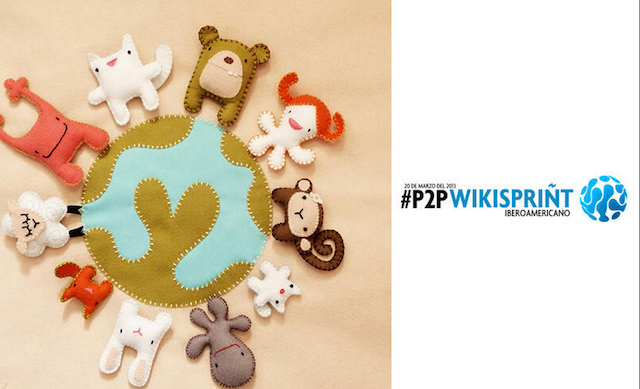 11. Imagery. How might the maximum number of people visualise “Wikisprint” or “P2P”, two words altogether outside of everyday vocabulary? By creating imagery. Mass media likes to link P2P to piracy. Exchanging music = piracy. In truth, sharing, generosity and collaboration are the more characteristic traits of peer-to-peer dynamics. P2P logic goes beyond merely cultural considerations. It’s scalable to economics, politics, ecology…. would it make sense to take advantage of #P2PWikisprint to declare war against the content industry? #No. It’s best to create new imagery. Give shape to a collective wish. Create an indestructible narrative. Because, in much the same way the Turks expelled the Arabs with lesser numbers, for us “the contest was not physical, but moral”. There’s nothing better than a new narrative to tear down the sharing = piracy cliché. Nothing more solid than intangible imagery. The exchange of toys amongst children that took place at the Museo del Juguete Antiguo (Antique Toy Museum) in Mexico DF represents a scene capable of demolishing the arguments of any lobby: P2P= children sharing affection.

12. Transverse connections, transnational connections. Outliers used a new type of indicator for visualizations: a transnational index of tweets. International information exchange was a constant during #P2PWIkisprint. Transnational exchange was over 40% for most of the day. On March 21st, at 05:00 GMT, it rose to 100%. Transnationality was much higher than the median for other global initiatives. Outliers, for example, calculated the transnational percentage of tweets for #15oct (the global mobilization held on the 15th of October of 2011) at around 5%. #GlobalP2P was characterised by dialogue, connection and the empathy of many peers, transcending all national considerations, nation states and political frontiers. Additionally, we witnessed the creation of múltiple, unprecedented spaces for asymmetrical dialogue. During #P2PWikisprint both regional governments – Rio Grande do Sul (Brasil), for example- and supranational organizations, such as The Iberoamerican General Secretariat (SEGIB), spoke on a one-to-one basis with activists from 15M, Occupy Wall Street and #YoSoy132.

13. Liquid Membership. Participation in the #GlobalP2P process, even at the mailing list member level, has some interesting quirks. You don’t take part in #GlobalP2P with a sense of absolutely belonging to a community. There is, however, a sense of community spirit. Association with the #GlobalP2P process is a lot more flexible than the militancy of a political party or collective, or following a religion or supporting a football team. Flexibility lies at the heat of #GlobalP2P’s strength, a functioning process much like the swarms described in Kevin Kelly’s Out of Control. Allowing for escape from the swarm, the possibility of dispersion, guarantees its strength. You can fly with #GlobalP2P for a while, like a bird in a flock. You can leave the flock at any stage, and join another. The ethical framework and moral commitment will incite a return to the flock for specific actions. The wind that was #GlobalP2P shall shake up the net once again.

3 Responses to “#GlobalP2P, The Wind that Shook the Net”

Leave a Reply to keithpp